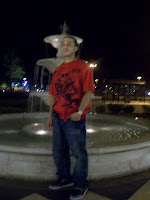 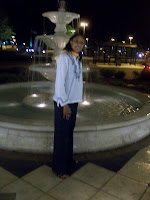 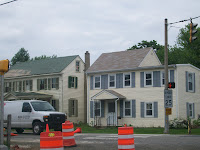 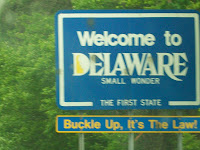 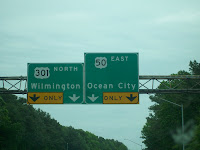 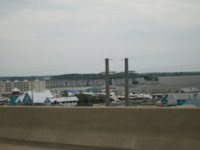 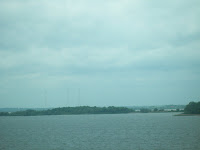 I have fallen in love!

I flew into Baltimore, Maryland yesterday morning for a wedding tonight in Delaware. My brother-cousin picked me up the the airport for the 1 1/2 hour drive to my hotel in Smyrna. The drive was breathtaking because we crossed the Chesapeake Bay! I looked out the window and saw the most breathtaking site. It was picture-postcard with the boats lined up along the bay and all the coastal homes. The weather was a little gray but and a slight mist swept over the bridge. It was refreshing.

Once we made it to Middletown, Delaware, literally in the middle of the state, my caffeine-deprivation was kicking in full gear. I do not do Starbucks and since I had a 5:50am flight from Lambert, I didn't have a chance to get a descent cup. US Airways has their complimentary coffee and all I can say is "ugh!!!!!"

We were on Mainstreet and I was thinking that a quaint little shop called E's on Mainstreet would have a good cup. Her espresso machine wasn't working! My cousin had a great chai tea but the latte was not happening.

My quest for coffee was interrupted thought with some slightly spice crab cakes from a placed called Immediato's. Let's just say I will come back here just for that. And they have veggie burgers!

The drive to our hotel was pleasant and I figured out that this part of the country, composed of Virginia, Maryland, Delaware, and Pennsylvania, is really just one metro. These are tiny states that have their own flavor. I think Baltimore is more like DC and there really are black people in Delaware!

Once I made it to my room, I took a quick nap, I had only been operating on about two hours of sleep over the last 24 hours. A couple hours later, a refreshing shower, and retwisting my locs and I was ready for a night of partying at the Dover Downs.

I had on some dress jeans, white and black tunic, and hot little black shoes my husband bought me for my birthday. I was ready for the rehearsal dinner and playing the quarter slots (something I had never done before!).

My cousin and his handsome sons picked me up for the short drive to Dover. I saw a few coffee shops as we passed and made him promise to find a way for me to get a descent cup before I left the state - yes, the latte queen needs her caffeine! Anyway, we entered the room filled with lots of love and family. My brother-cousin is certainly blessed to marry my soon-to-be sister-cousin. She is the only girl of five brothers.

Aaron, my cousin's son, and I got our eat on with plates loaded up with vegetables and fruits. He is a deep young man, amateur boxer and spoken word artist. At 29, he is very wise. His is the next wedding in the family. Well, he and I talked and ate and then hit the casino.

Our trip downstairs was inspired by one of the younger cousins and his $50 win off playing $5 in the slot machines. That kids was happy. He really wasn't supposed to be in there but at 17 and 6"3" with a football players shoulders, that little lady at the door wasn't carding him! I thought, ok, I've never done this before, have some fun. Well, I was overwhelmed by all the machines in the room! I told Aaron I had to find a latte first!

Finally, finally, finally I found a good one. In the Dover Downs Hotel, in the lobby with all the other little shops was a little place called Sweet Perks. Ok, I was back alive with a white mocha! I will come back there before I leave if I have to because it is close, near a mall, and of course I need my caffeine!

With latte in hand, a couple $5 bills, Aaron and I set off to find a machine.

There is a strategy behind it. He told me in Vegas the older people walk the rooms and watch who has been on a machine for along time, then they sit down, play a few dollars and then hit.

I just wanted to say I tried a new experience so I popped in my $5 (the machines would not take $1 bills which is what I wanted to do at first.) Well, I hit the button, lights when off, the little wheels started rolling and then...nothing! We went to another machine, our intention was to find the quarter slots but that room was HUGE. Anyway, I lost two lattes worth and that was enough for my speed.

Aaron and I then went out to the fountain, talked some more, and just waited for rides back to our hotel in Smyrna. It turned out, this new hotel is filled with family for the wedding, we have the entire third floor.

Once back in my room, I refreshed, retwisted my locs, and crawled into bed ALONE. That was glorious. I was able to nuzzle under the covers without arms, legs, or noise.

This morning sent me on a quest for coffee. I'm not in love with Wawa. One of the younger cousins told me they had good coffee. She was right, not a latte, but a good cup of coffee, a toasted cinnamon raisin bagel and some berry cream cheese. I am good now.

Delaware will likely see more of me. I have yet to get to the beach and am not sure what is planned for this afternoon. Well for me it will be a little work, a little sleep. The rest of them are getting ready for the wedding. I have to practice the piece I wrote for the ceremony.

The energy in the air is because these two are beautiful people. Both of them have lived a life, each with children from previous marriages. Their journey allowed their paths to cross and they are kindred spirits. Simply made for each other and I would journey again across the country, even without caffeine to witness this coming together!