Posted by Tayé Foster Bradshaw on July 12, 2010
I put away my creative thoughts for a moment, about a week or so, to free flow, think, heal, reflect, and relax.

When I received the news about my step-mother, all sorts of emotions cascaded on me like rocks falling from the East Tennessee mountains.  It was unexpected, I was unprepared, and the reaction was unknown.

After I processed that bit of news and thought of all the things that could have led up to it, it was time for my family to go on a much needed vacation.  The respite was good in that my husband was not attending some conference, it was not some singing event, or family event, it was free-flowing, open agenda, just plain fun.

We set out early on Friday, July 2nd for our roadtrip to Atlanta.  We stopped in Clarksville, Tennessee to eat like the natives.  We had good, old southern barbeque.  It was the kind of place that set rolls of paper towels on each table and eating with one's fingers was the norm.  Even the resident vegetarian had to sample a rib tip.  We weren't on an agenda.

Our next adventure was a breathtaking driving up the mountains.  The scene was the most beautiful ever with lush greenery in every direction.  It almost made me want to sing "America, The Beautiful."  I took a gazillion pictures going up and coming down.

We had a great time in Atlanta, just being.  We were fortunate to have two adjoining rooms.  The girls had one, the guys had the other.  Traveling with family and having two full bathrooms at our disposal was well worth the trip!

Atlanta was great to explore and while we didn't get everywhere, we jam-packed a lot in our visit from Friday night to Monday afternoon.  We had daily full breakfast in the hotel free due to my husband's gold status as a Hilton Honor's member.  That cut down some expense and allowed us to be able to visit the King Center, take a side stop to a mall in Alpharetta so the girls could get an American Girl Atlanta t-shirt.  We went to the Coca-Cola Museum and the Georgia Aquarium.  Of course, I found some local coffee shops in Clarksville on the way down and Nashville on the drive back and stopped for a latte.

I stepped away from the usual of my life from a busy summer program to the endless mountains of clothes that need to be washed (and our dryer is still on the fritz) and just stayed in the moment.  We were able to inhale, and more importantly, exhale, really exhale.

Last week was busy and my vacation euphoria lasted through most of it.  I ended with a couple evening events tied to the Missouri Legislative Black Caucus 25th Anniversary Events.  And I saw my step-niece now little sister.  And I paused.

She was so poised and beautiful, she had received the full benefit of growing up under my father's training.  She is twenty-six years old, married, and the mother of four.  She is a legislative aide and was in town working during the conference, she was one of the hostesses for the awards banquet.  It was poetic, in a way, to see her, and it was all ok. 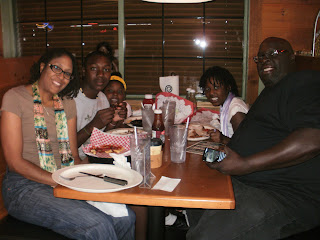 Life happens for reasons, there is a season for everything, and sometimes, it is just important to step back, and take a conspicuous absence, just so life can go on again.
Atlanta Chattanooga Clarksville family vacation Tennessee mountains