A Moment In The Storm

Posted by Tayé Foster Bradshaw on February 02, 2011
I'm not sure what it is about an epic winter storm, a storm of historic proportions, a snowmaggedon, or whatever descriptor has been used to describe what descended on the middle of the US in the last day and a half, and still coming in some parts, that gives us pause to think about what is really important.

Honestly, I didn't know a storm was coming, had I not been in Target doing my usual household shopping (not food even) on Saturday night and heard a casual reference to mid-week weather, had I not been in the ER with my daughter early Sunday morning and heard the nurse talking about bringing an overnight bag for Wednesday or heard someone casually mention the storm on Sunday afternoon or received an email from the other mom coordinating tech week food on Sunday morning, I never would have known.  My kids would have been up a creek without a paddle full of cereal, snacks, fruit, and chips to keep a seven, nine, and sixteen year old happy for two days.

I spent Monday doing my usual monthly grocery shopping with a few extra boxes of snacks and non-perishable foods thrown in.  I was at Trader Joe's and noticed other people doing the same.  I had sent my husband out on Sunday night to Schnuck's and he said there were a lot of people there.  The news agencies were showing rows and rows of empty grocery shelves by the evening news on Monday.  We wanted to be ready, references were made to St. Louis in 1982, I wasn't living here so never experienced it.  I had lived in Michigan, Iowa, and Chicago so we never stopped moving because of snow.  This was different, ice storm first then buckets of snow.

As predicted, the ice blanketed the state, our Governor issued a  State of Emergency as did our neighbor to the east, Illinois.  The University of Iowa cancelled classes yesterday and that NEVER happened when I was a student there.  Washington University closed early on Monday and cancelled classes on Tuesday, last time that happened was 1982.  My husband's university, Harris-Stowe State University, did the same thing, he and the kids have been stuck in the house the last day or so.  In mid-Missouri, Mizzou, Columbia College, Stephens, and Lincoln University all closed down.  Friends in Jeff City report 16 inches of snow.  What was fun for one's son building an igloo yesterday will be a nightmare for parents who may be in for two snow days in a row or two days of missed work.  The Governor of Illinois called for all state workers to remain home, my university, Lindenwood University-Belleville, has cancelled classes for the second day in a row.  It is serious out there. 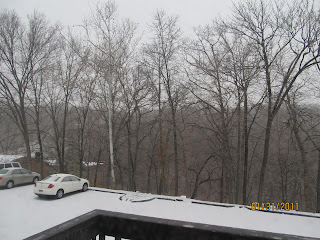 So in the middle of all this weather, I stopped for a moment and thought about how we could all just breathe and enjoy the experience.  Rarely, if ever, does my husband have a snow day and is able to cuddle up on the sofa with the girls and watch Titanic.  He never gets to just relax in on a weekday morning and while still working, is able to have more hours of little girl banter.  My work is always with me since I'm primarily at home so I did the obligatory cooking, laundry, and dishes.  I made a couple hot meals in case the power goes out, at least they will be fed before or if we have to deal with fruit and granola bars.

The girls played Mancala, read books, and stayed in their pajamas.  The teenager stayed in his bedroom cocoon playing video games and eating boxes and boxes of cereal.  He said he was hungry and downed half the grilled veggie pizza I made for dinner last evening.  His opening night has been moved back from Thursday to Saturday and he is pent up with energy, maybe he should go shovel snow, but we live in a townhouse where the maintenance crew takes care of our roads.

I've touched base with friends who are reporting family meals, cuddles by the fireplace, watching their kids play games, and enjoying the weekday gift of nowhere to go.

See, too often, we are rushing around to and fro, getting thing done, spending money, rushing, and often don't have time to just sit and not have anywhere to go, even all the major malls in St. Louis are closed so even that diversion isn't available like usual snow days.

We are blessed that science and technology has produced meteorologists smart enough to study the weather patterns and alert people from Chicago to Texas of what is coming.  We were prepared and ready.  The crews were ready, Governor's had a chance to call in the National Guard and be on high alert.  Lives were saved.  People realized it was more important to be smart and stay off the icy roads than to go to work if they weren't emergency personnel, one day pay is worth having a life to live when spring comes.  I hear the groundhog is declaring an early spring, something to give us warmth on a cold day.
2011 winter storm Midwest snow Missouri snow storm snow storm of 2011 state of emergency