Posted by Tayé Foster Bradshaw on November 08, 2015
It was quiet news at first.

Black students in silent protest for the condition of black lives on campus and in Columbia.

These students were booed and met with the usual middle Missouri brand of racism.

The students kept their resolve and understood that the issues they were speaking up for included the larger social issues that have been a part of the Black Lives Matter movement. Specifically, they understood that
1, Denying graduate studnets access to health care is a breech of a promise
2. Planned Parenthood is a comprehenisve health option for many students, especially in reproductive care
3. Continued racial unrest, much hadn't changed since the 2010 cotton incident
4. Mizzou has a strained history of racialized behavior
5, The Lloyd Gaines case remains part of the story

The first news tricked onto social media when the Concerned Students 1950 organized their walk-outs, sit-ins, and a hunger strike by one of the graduate students.

They have taken their protest to key spots on campus including the Plaza 900 dining hall, the Alumni Center, and through the Quadrangle during the recruitment tours. The Columbia Missourian has been reporting about the situation on Mizzou's campus and the very determined efforts of the students, including Jonathan Butler, graduate student on a hunger strike.

It remained a quick scan for most of those outside the university life. There were some posts and some notices, a read-a-day to find out what the university response would be. It was remininsent of the SLU occupation that happened last year during the days after Michael Brown's murder. 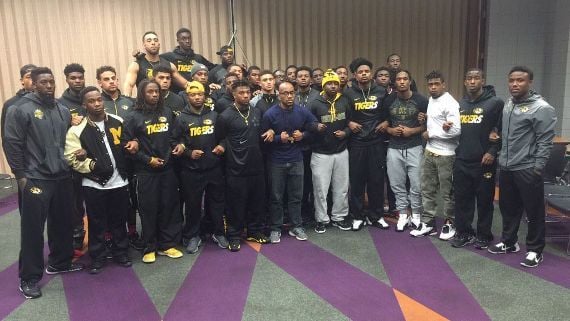 Saturday, November 7, 2015, represented a catalyst of change and a conversation of courage for the black athletes to declare that they would not play football until System President, Tom Wolfe, is either fired or resigns for fostering an environment of homophopia, racism, and sexism.

These students were bold and strategic in their demands. They took it to the top. They stood united, they counted up the cost. They also are keenly aware that the powerful Mizzou athletic program has been boosted on the backs of several generations of black men like these, recruited to play for the Tigers, while their counterparts encounter otherism in class, cotton thrown on their student union, or residence halls painted with human waste. They know they are in the den of the most vile racists in the middle of the state.

This is big, it is a moment, a potential for change, like the students of a generation ago who helped organize the Montgomery Bus Boycott or those of Freedom Summer who descended on Mississippi to register black voters, this is a time that the Black Lives Matter Movement needed.

Mizzou matters because of The Dred Scott Case, Harris-Stowe State Univerity, Lincoln University of Mo, Lloyd Gaines, and the continued racism in education. It matters for all the staff, professors, and students facing ill treatment from departmetns at the university, from college recruiting to housing, to academic departments, the atmosphere is one of oppression, filled with rural and mid-state racism.

We need to keep our eyes on Mizzou, it is going to be an interesting fall.

"It is our duty to fight for our freedom. We must love and support each other. We have nothing to lose but our chains."
Black Athletes walk out Columbia ConcernedStudents1950 Gaines/Oldham Black Cultural Center Jonathan Butler Missouri racism Mizzou Hunger Strike MO President Tom Wolfe University of Missouri Columbia