Posted by Tayé Foster Bradshaw on December 10, 2015
It seemed as if the winter winds of hate and sheer racism couldn't get any worse than the Anti-Muslim spewing out of the hell-hole of Donald Trump's mouth.

Then, the unusually warm weather in St. Louis and the light from Hanukkah were not enough to keep the evil of white idiocy from rearing its ugly head.

Yesterday, while at local Rabbi was offering the message and blessing before lighting the White House Menorah, a quarter-century old white girl from Texas was again having a day at the highest court of the land where she took her millennial temper tantrum. She wasn't good enough. And that just didn't sit well with the rich white girl.

If you dial back a few years, the case bubbled up because Abigal Fischer decided that surely she was better than the 168 rejected fellow white kids who were vying for a spot in UT-Austin's Class of 2012.  Somewhere in that dense brain of her's, she felt that it wasn't because they were truly smarter and have higher GPAs, higher ACT scores, and impressive extracurricular activities that got the black kids in, it had to be because they "took" her spot.

Now, the biggest problem with this and the case in California and Michigan, is that white kids already have affirmative and entitled enrollment options in several universities.

It is called Legacy enrollment.

It is how the vacuous presence of former President George W. Bush got into college, even earning an MBA through his C-grade drunken stupor.  Legacy, meaning, their parent attended that school. For some, like the kinds of kids in Early Decision who hire private admissions coaches, they hope daddy or mommy wrote a large enough endowment to guarantee them a spot.

Yesterday proved to be a potentially dark day and one where twitter lit up under the hashtag #StayMadAbby featuring alumni of UT-Austin with their earned degrees or in their academic regalia.  Facebook was filled with lengthy posts arguing the merits of the case against Brown v. Board of Education or Baake or even the Dred Scott case. There were white and black just done with the evil heart of a lifetime appointment of one Antonin Scalia who opined that black students were just not cut out for a selective school and belonged at one with a slower pace for people like them (complete paraphrase).

All this in the shadow of the relative quiet of the 150th anniversary of the passage of the 13th Amendment on December 6th, effectively intended to end slavery in country and open the door of citizenship, personhood, and yes, education to the nation's black people. Merely 150 years ago. It has only been 50 years of Civil Rights and the hope of opportunity against over 400 years of forced enslavement.

The thought of blacks as not good enough is what has kept doors closed in places like Kirkwood, MO, that has repeatedly declared they "just can't find any" black teachers for the high school that meet the "high standards" of all the nepotism that runs rampant in the district. They have plenty of Abigal Fisher-like and plenty of gay and lesbian, but can't seem to find one. The thinking of Antonin and even this mediocre white girl is the same thinking that has hindered educational opportunities throughout all levels of education in this country.

Yet, despite these obstacles, black achievement is as high as the sun shining in St. Louis on an unusually warm summer day.

While an attempted dis, the reality is black people have attended and excel at the nation's selective universities as well as the nation's HBCUs.  Twitter lit up with the #StayMadAbby hashtag as schools such as Harvard, Princeton, Columbia University, UT-Austin, UNC-Chape Hill, DePaul University, Duke, and Washington State University, among others, were all represented by their black alumni in a refute against the racist statement by Justice Scalia.

Abigal Fisher is the face of white woman privilege who just didn't cut it.

She even had a cadre of white men fighting for her "honor" and "rights."

One has to wonder, though, if her overindulgent parents, likely the ones footing the legal bill, ever bothered to actually be parents and demand that she sit down and study, if they told her that  getting in is not guaranteed, even if they have lots of money, that she needed to have something to stand out other than shopping.

Yesterday had the dark cloud of racism threaten to block out the sunlight of possibility, but in true come-back fashion, #BlackTwitter had a field day, even causing mainstream media to stand up and take notice.

Let's keep an eye on this case and see what else happens. Meanwhile, perhaps Justin Scalia should try a less challenging occupation. 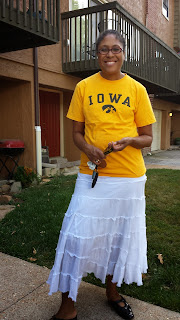 Tayé Foster Bradshaw is the writer's nomme de plumme. She is a proud graduate of two selective PWIs, earning her Bachelor of Science in Marketing and Management as well as her Masters of Business Administration. Her #StayMadAbby post included her husband's three degrees from highly selective universities, includin earning his PhD from the state's flagship school. When she is not considering social justice, education, and human writes, Tayé is found writing with her handmade pens, sipping a latte, or wearing one of her signature scarves. She and her family live in St. Louis.