I woke up with the sun streaming through my bedroom.

I woke up rested.

I woke up renewed.

I woke up rejuvenated.

This has been the first morning in four years that I did not wake up with the heavy cloud of division, despair, and destruction that has loomed over America since 2016.

For years, months, weeks, so many have prayed, protested, and praised their way to an America that is reflected of our better selves.

Look out over the hills, there are more who think of the common good.

When I received the news, I, like so. many others, had already been up for days, weeks, months, working in the election cycle, watching the news, and then glued to CNN or MSNBC for the results to come in. We alternated between our social media groups, and my teen daughter's updates with her friends.

It was a typical Saturday in our house, we are still settling in the move from the Midwest, Missouri, exactly, to the Northeast, Connecticut, exactly. So my daughter was putting her clothes away in her new dresser that she put together herself.  I had meetings in a couple hours and after coffee, decided I needed to pop back into my room to see the count.

Then it happened, it flashed on the screen.  Timing. I erupted in a loud scream.

I called for my daughter to come here. My husband was on a flight. She and I erupted into screams of jubilation, hand claps, screams, twirls, and yesssssssss!

We reached out, each of us, to our groups of people that we had been with throughout this season.

Jubilation was in the air.

What sat with me for the remainder of Saturday was the hope and joy.

I wasn't able to take the hour or so drive to Delaware, my day was filled with meetings, but when it was all over, I joined many others to hear Vice President Elect, Kamala Harris, deliver her speech and then introduce President Elect Joe Biden to deliver his speech.

Each of them acknowledged how they got here.

We held vigils, teach-ins, organized our communities, registered people to vote, called, talked, donated, strolled, we did everything we could to make an America possible where our daughters could breathe.

She wore that cream suit and claimed her space in history.

I could hear Shirley Chisholm and Fannie Lou Hamer and reaching all the way back, Sojourner Truth and Francis E.W. Harper. I could see my late Mother and Grandmother, both my Great-Grandmothers, all women born in a time when a woman did not have a voice.I could see into the eyes of my almost seventeen year old daughter and see so much of the possible. 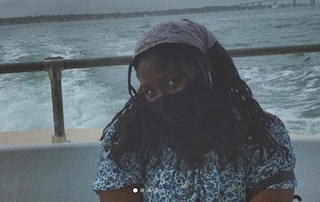 So, I feel good, this Sunday morning. It is unseasonably warm here in Connecticut. Before my afternoon celebrations commence, I may take a walk on the Sea Wall and look out over the waters to whisper a thank you to the ancestors who breathed this moment into being.

Hope and Joy, it is just so wonderful.