How do I know these people, I asked myself on this cold, snowy, Friday in Connecticut.

Being in a new state, getting acclimated to new things, pondering what is ahead, also gave me pause to take some inventory of my life in this winter of my contentment.

I usually wake up early every morning and Fridays are my Sabbath, so no work to rush to in my office, no Zoom beckoning me across the screen, no whiteplaining I had to listen to from do-good-progressives, no crisis I needed to contend with in the cause of justice. Just me, and my time. 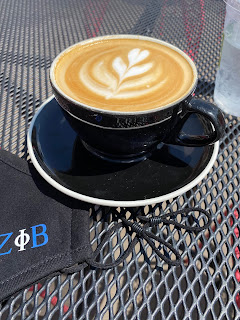 Over an oat milk, brown sugar, and rosemary latte, I sat at my acacia wood table with the bamboo  benches holding my handmade mahogany wooden pen, and pondered these people who read my posts, chomping parts of my story like morsels feeding a hungry soul.

I fed into it, I spooned up parts of my authenticity for consumption, and today, felt myself wondering, who are these 696 people and their friends who were feasting on my thoughts?

Now, I'm no "internet influencer" or even a real "content creator" that has "10K followers" that capitalism wants to monetize for marketing potential.

The "book" was unknown to me when a second cousin once removed told me I needed to get on it, that was in 2008 at a family cookout before the Obama election. Probably much to the chagrin of those cousins, it became a space for my political, racial, and social wrestling with society as I was making decisions between an advertising PhD or getting my M.Div. I did the latter. However, the "book" was a platform for thoughts I was no longer writing in articles during my R R Donnelly stint through Helium.

Then, some of those folks said I was "too political" especially since me getting on the book was on the heels of a shooting in my former town that catapulted me into activism in a way that I hadn't done before. That was a full seven years before Ferguson became synonymous with Black Lives Matter and a space that people felt compelled had to be on their résumé in order to be considered down for the cause.

I was called radical by white folks and bougie by Black folks, and too much by family, even kicked out of the family page for asking folks to pay attention to the local elections, to get registered, to vote, and to not take all this birtherism stuff as fodder for jokes, that something dark was coming. I was dismissed, then, some of those same cousins were posting about all that during the dark aftermath of the 2016 election and the shenanigans of the 2020 campaign, and I just said, "hmmm."

It made me think about how much of ourselves we share.

As a writer, it is a particularly vulnerable space to be.

We live in words, in thoughts, in trying to figure out the world and express that in a way that makes sense. Not always for someone else, often just for ourselves. Then we share it with the world for connection, communication, camraderie, shaking as we hit post.

This morning, I was taking stock of some things in my world.

I'm writing a poetry collection. So carved out intentional time to muse and jot thoughts. I still work full-time and am raising my last child, am planning the 2021 literary circle collection, and am a minister. My plate is full, so pulling out a day to write by hand has been a gift to myself. Writing it and not posting it on the Pink Latte has been hard.

Writers, poets, essayists -we want to engage, to be read, to have folks read our words.

But again, it is very vulnerable.

A poet once wrote that the computer is not private space.

It made me pause this morning when I thought about that.

The "book" and the "gram" are making money off our content.

Some of us are called and compelled to.

Some of us have other motives.

Some of us were just reaching through the distance to be human in the midst of a pandemic that has us all sheltering in place, or like those enduring this storm, reaching out to say they are still alive.

I pondered the 696 this morning.

What of their lives? How did I know these people? What parts of my story are their story? Why are they even on my page? How would I recognize them in real life?

It was a thought, just a thought as I took inventory of my life and honestly, had to clear out some space to breathe. Again.

And pick up my pen, and write some poems this morning for a collection that is coming and declaring a space for myself in a world that says I'm too old or not relevant or too Black or too radical or too bougie, or too anything - but still - there.