Guilty on All Counts

I, like many African Americans, waited for the verdict on the Derek Chauvin trial.

We waited because in the middle of a pandemic, a Black man was brutally murdered, 9 minutes and 29 seconds of the knee of hate on the neck of George Floyd for simply being Black.

Human beings, we are human beings, and his cries were ignored while a white man with a badge callously kneeled on his knee, with his sunglasses on, careless.

I mourn with his family and all the young people who were brave enough to record that murder.

The trial was heart and gut wrenching, hearing the testimony of the witnesses who were helpless because of the power of that badge to dehumanize Black and Brown people.

We watched the trial when while it was going on, another Black man, Daunte Wright, became an ancestor too soon. His life taken over air freshener in his mother's car that she let him borrow and a white identified Hispanic woman forgot 29 years of police training to claim she thought her taser was a gun. What was it about this fair-skin, Black man that made her think and fear?

That is part of the sin of America. 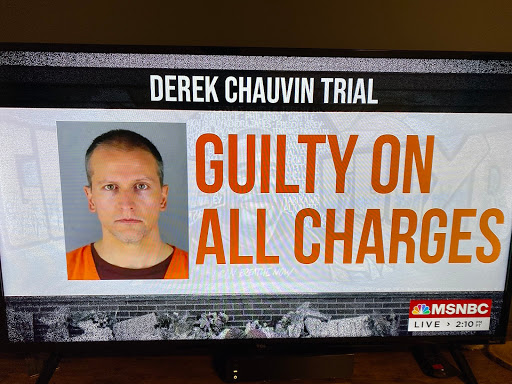 Tonight was a drop of justice. There are hundreds of thousands of others who did not get to see a police officer being led out of court in handcuffs but for the family of George Floyd, they caught a glimpse of justice.

May we have a different possibility and have reform in this country that is fast becoming a country that reflects the world and not the artificial imaging of white men.

I was with my teenage daughter when the verdict was read and felt the air I held in for weeks, months, almost a lifetime, be exhaled for just a moment. For those who could not breathe, we were able to take a momentary breath that justice prevailed.

Thankful for the jury that believed their eyes and did not waste time in coming back with the verdict.

Imagining the possibilities for my daughter and her generation that they, too, can go out for a drive and come back home. That they can live, and that change can be possible.

I can dream for them, for so many names who never received justice, from Amadoo Diallo when I was a young girl to Daunte Wright with me as a grandmother, I can dream that with this verdict, justice will prevail for Black Americans.