When will we be able to simply be in this country?

When will our lives matter?

I intentionally check-out of the news and social media for the majority of the weekend. It was consuming, with the trial and the obstructions still coming from one side of the Senate floor, that I simply tuned out. It is the start of my daughter's spring break and I was at a conference, so whatever was happening in the world was going to happen with out me for a few days.

Then, I turned it back on. It is Monday and I needed to attend to something.

He was barely a man, twenty is not an adult, yet. He couldn't even legally buy a drink, he was just beginning.  In the car his mother purchased for him, for his start in life, and he met a fate we fear. A traffic stop.

His death comes just days after seeing the video of the encounter of the Second Lt. Carion Nazario who was driving through Windsor, Virgina, some no-dot-on-the-map town and two yokel-locals who wanted to flex. That video was actually what prompted me to just tune out. I turned off the news, didn't watch my usual Saturday or Sunday morning commentators. I needed a break.

Black Death is not entertainment.

Yet, between the videos, and they are necessary to prove what we have all been saying for over 400 years, that white people have been lynching Black people with impunity because the laws have been on their side. Law Enforcement was born of the Slave Patrols and then the ones deputized to enforce the Black Codes and "vagrancy laws" that sprung up after 1866.

Something about Black people and freedom, freedom to come and go, that has been a target in this country. Those are all encounters that make the heart race and hair stand up on edge. One doesn't know if they are going to simply be harassed, like my daughters and her friends when they were stopped outside Jackson, Mississippi on the way to their hotel because the storm knocked out power and water in their dorms. Or the time I was stopped taking my son to his audition at Alabama State University, accused of speeding while literally hundreds of cars were zipping by me. He saw my son in his all black dress attire and my then-seventeen-year-old-son wasn't driving and Mike Brown was still a young teen in high school, so we lived.

But so many others didn't make it. Sandra Bland didn't for daring to ask why she was being pulled over.

The youngBlack male law student, moving home in Covid in the U-haul was stopped by an Arkansas State Trooper, made to get out, because of nervousness.  He was taunted by the officers for being afraid and calling his father.  "I honestly just don't want to get shot." None of us do.

Sunday, April 11, in Minnesota, the same place where Derek Chauvin is on trial for 9 minutes and 29 seconds of murder, another. young Black man, Daunte Wright,  was lynched by the system that does not see our humanity, but calls out the National Guard to protect buildings.

It makes no sense.

Black people do not commit crimes more than white, in fact, far less than white people. So why are we always "suspicious" and "fit the description" for being in a car? 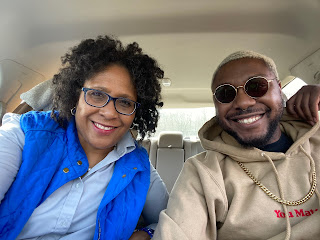 My youngest son is twenty-six and bought his first car. He lives in Boston and surprised me by driving down to Connecticut to see me. He has three degrees, works, and picks up deliveries as a side hustle.

And I am petrified.

Because my. youngest child is seventeen, as she has her license. She is a junior in high school and we are thinking of getting her a car for senior year. 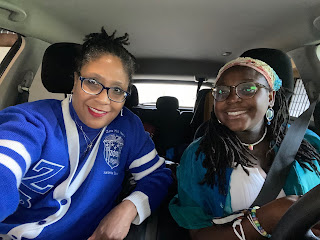 The north is not different than the south because antiBlack racism is woven into the fabric of the country.

This morning, another Black mother doesn't have her son. Another community is in pain. Another hashtag.

While white America sleeps or rests or doesn't have to care or find some reason to justify a twenty-year old being murdered by the police during a traffic stop.

What they do get is immediately a line of heavily armed police lined up to protect a building after citizens demanded answers. That is what they do get, that protection of property but not life.

There really are no answers to that question. From the way the media treated the death of DMX versus the way it treated the death of a prince in a foreign country a lot of them aspire to be like, is ridiculous. The choices of words and descriptions of one over the other.

The trial that they tried to make about the victim who is dead rather than the criminal-in-a-badge who has a history of kneeling on Black people.

There will be media pundits trying to go through the young man's IG or other social media, try to find a juvenile record, try to disparage his family, something, anything to make them feel better about ignoring the fact that this Black man was murdered by badge.

And the numbing never goes away.

Even when tuning out of social media for a few days, even with turning the news off, the heavy heart of Black mother's remains heavy.

Tayé Foster Bradshaw is lives and writes in Connecticut, a Midwestern native with Southern Roots, always with a latte in hand, wondering how many more have to succumb before this country changes.