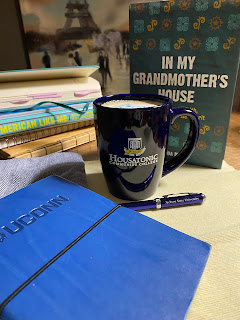 Today is the Activities Fair at my husband's college, Housatonic Community College.

It is my daughter's second day of senior year and when we register her for her UConn dual-enrollment.

My daughter at Thee Jackson State University is still sheltering-in-place for the aftereffects of Hurricane Ida that traveled north and is headed to the Atlantic states.

All of us are in this season of shift, of change, of beginning.

When I was younger, many moons ago, my late father convinced me to go to technical school (think trade school with academic rigor but not the English classes of a community college). I told him, "Dad, I don't want to be anyone's secretary." I said it with all the arrogance and indignity that my teenage self could muster. I had avoided all the Gregg Shorthand classes and secretarial classes at my high school with the entire trade school in the building. I wanted more. I was a product of the dreams of second wave feminism, before womanism was uttered, and the hopes of IBM dancing in my head, even though that is not what I wanted either.

I went though, my father paid for it.

And I excelled. I graduated with a 4.0GPA. I decided not to take Gregg, It looked too complicated, I went with the speed writing new shorthand that ended up serving me in college. I learned to type on the IBM Selectric, took advertising, marketing, accounting, and business to round out my studies so I could graduate with a diploma and be mailed a certificate.

Daddy was right, though.

"Daughter, it will serve you well in life to have a skill, a trade, something you can do with your hands."

I graduated with a job offer at one of the major state offices, so at the ripe young/old age of twenty, I had a diploma, an apartment, and a full-time job working for the state. I also started at the local HBCU, not where I wanted to go, but where I could be a part of their new offerings of full-time college at night.

It was the early 80s and George Orwell's prediction hadn't come true so in that election year, we thought we had all the possibilities in front of us. We were college protesting Apartheid and chanting Run, Jesse, Run. We felt so modern and possible and imaginative, and well, adult-ish.

Looking back, I realize how very young I was to have so much on my shoulders.

I grew up when it was not unusual for guys to graduate with a full-time job and girls to graduate into marriage and mommy hood before the next homecoming parade. I knew I wanted more for myself than that, but before the Internet, before Google could give me the answers, I didn't know where in the world I would want to go or could go, so safe it was.

We often talk to high school students about their "safety" school as if that is a bad thing. What they can be assured of getting into and having a good start, their just-in-case the dreams did not pan out to Harvard, Yale, Princeton or Brown or to Spelman, Morehouse, Howard, or Hampton.

Fast forward through years of living and watching my children emerge as adults, watching the generations after generations of students my husband had guided through five universities to his now sixth institution of higher learning, I'm considering the practicality of what one can do with their hands.

The hands, head, and heart can all come together for meaning and purpose.

This emerging generation is teaching us a bit of that with them seizing the opportunities presented to them, the totally first Digital Generation. They are influencers, making extra change through their "what if we do this" personalities. In the vernacular, "I ain't mad at 'em."

They have watched their grandparents silo and decided they could honor their multiple ways of being, of creating, of becoming something.

So, on this week of students going back to school, colleges navigating to their first day of classes in person with masks, some kind of hybrid, or totally virtual, they are all showing up their parents with their sense of living - anyway.

My daughter will be twenty on Sunday. She and her classmates at her college have all found ways to make it happen. They are stylists picking up side gigs that bring real world learning to their classrooms; they are writers with freelance gigs while they study journalism in the twenty-first century; they are musicians playing virtual weddings; they are innovating.

That is what we want them to do, right?

To question, to learn, to emerge, to be.

My youngest started crocheting hats and sells them on her IG store. My oldest just opened his new store that does custom cleaning of those high end athletic shoes of the last thirty years. He collaborated with his business partner and the other side is a studio where emerging voices can rent space. Innovating.

It brought me back to what my father told me almost forty years ago. He was right. Having something I can do with my hands, to create, would serve me well. What was supposed to be my just-in-case became my doorway. I was able to move to a big city and work for two major financial institutions in the C-suite. It helped me freelance while I was finishing my degree, expanding it to include some marketing, consumer behavior, and creative projects.

What Daddy told me is what I also share now.

You can be and do all sorts of things and don't have to be just one. Gone are the days of a job from high school that gets the house, car, and family. This generation has taught us that there is freedom in choosing and in being able to use many parts of oneself to fulfill one's purpose. They have also shared with us the woes of being a solopreneur, an independent scholar, or simply trying to get through college in a pandemic and a hurricane.

I am in a transition.

Maybe we all are, entering the third school year in a pandemic, completing a full year in the northeast, still working virtually and realizing that that can take me to the world, we are all transitioning to what we can be and do in this new season. Our country finally ended a twenty-year-war, albeit with some having lots of questions and concerns, I'm glad it is over, we have some saving on these shores to do. We are reconsidering that one or two or even three hour commute when we sit in front of a computer all day anyway, What about the world could be possible that the pandemic forced us to consider?

For my children and the college students my husband works with, the possible included a community college with people of the global majority celebrating so many cultures it is like the United Nations on campus. They are highlighting the gems right in front of them that can launch them into a viable career if they don't want to be like their classmates and think that Harvard or Hampton are their only choice after high school.

New school years always intrigue me, give me that sense of awe and wonder. It is a signal of seasons changing and the winds literally shifting. None of us really know what our tomorrow will bring, the events of the last week are enough to remind us of how fragile this life is, but what we do know is that we can keep evolving, we can be present with those we love and care about, we can learn new things, and we can be ...anything.