It was an especially difficult week to be Black+woman.

In one week, I learned of a dear elder family member who contracted the Covid virus, during the rise of the Delta variant. She was one of the ones who hadn't been vaccinated, part of the generation of Black people who remembered American's deathly experiments on our bodies. She was in ICU fighting for her life. Thankfully, she is recovering now, miraculous.

Then, we learned of the death of two prominent figures in our former town, one was the mother of a dear family friend who was a trailblazer for women in elected office. Then, the other, was a trailblazer in Black education, but a challenged leader for those who worked day-to-day with him, navigating that terrain was a journey of souls.

I had a visit to my pulmonologist who said "if I didn't know your history, I would think you had COPD." I am a lifelong severe acute asthmatic, one of the reasons why I have been extra vigilant and careful about being around people since the pandemic. I am fully vaccinated and continue to wear a mask when I am indoors around people I do not know.  Being in a new state and getting care established is a long process. My young doctor was lauding the advances in asthma treatment and said, "this is a great time to be working with this disease." I haven't been hospitalized since 1999 and am thankful for bright young scientists who continue to study the lungs and their function. He put me on new medicines.

A lot can happen from Monday-Thursday, my normal workweek when I am challenging systems of thinking through ways be be liberative for people. I had a meeting for one of the national trainings I attended that invited us to consider those problems that take a longer fix, some strategic some tactical. It was on the heels of another weeklong training that centered messaging and meaning.

So, to have my week end in the way it did was almost more than I could take. It was targeted, triangulated, gaslighting by someone I once held in high esteem. This professional attempted in all ways to destroy my heart, to slice and dice me with words that cut, calling my presence a courtesy and demeaning my education, my contributions, essentially everything I had contributed over the past few years. It was everything in me to not become the raging bull of my zodiac sign. I don't do verbal fisticuffs well, that was never my nature as an empath and INFJ. It did leave me stunned and stung.

I did the only thing I could do, embark on a path of self-help and healing, something often denied Black women.

We are often told to just be resilient, to deny pain or acknowledge that someone professionally caused us pain, to feel the fire of flight or fight, especially when your livelihood is at stake. Those are parts of the things Sha'Carri Richardson, Naomi Osaka, and Simone Biles experienced. Everyone weighing in on how they should have reacted to feeling within their bodies the intense mental and emotional toll of performing at peak during challenging times. We are not often afforded the space to be comforted.

The water was my only rescue. 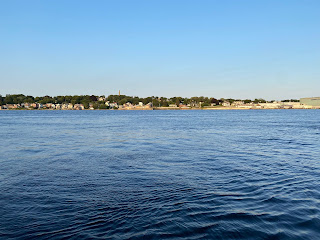 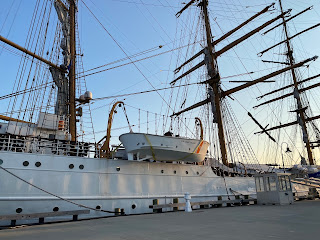 I drove up to New London to walk along the pier and gaze at the Coast Guard ships
that are there to seek-and-rescue. 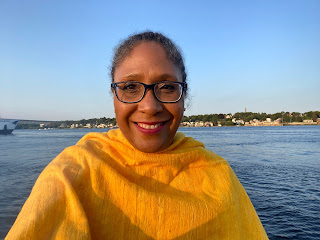 I looked out over the Thames River and thought of the hundreds of others who possibly did the same thing, looking over at the other side. A couple of Black women were walking back along the pier and told me I was beautiful. It warmed me and comforted me.

Being in New London also reminded me there are good people. I met a family from my hometown. Turns out, we sorta knew each other, my daughter and her great-niece were classmates. I smiled at the encounter and thanked God for "it started with the shoes" conversation that gave me joy.

It was still hard to feel my heart not beating at hyper speed over what occurred in the previous week, most especially on Thursday, but being outside, seeing people, feeling the sun, seeing the water helped.

August 1st began on a Sunday with our family making an impromptu decision to drive up to Newport, Rhode Island before our college daughter flys back on the 11th. 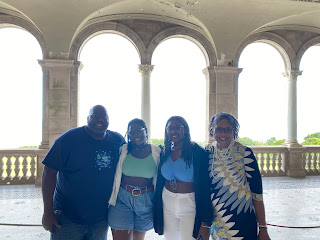 We walked along the ground of The Breakers, we are members of the Newport Mansions Preservation Society and so enjoyed a relaxing moment giving our daughter the tour she missed last year while beginning her college journey in the middle of a pandemic. We didn't attend the Jazz Festival, too many people, but were reminded of the beauty of art that surrounded us in that lovely place. Being in New England has given us a different perspective on life, one I had to remind myself of.

We walked a bit along the edge of the waters view from there and after dinner, drove along Ocean View Drive to feel the chilling evening breeze. The serenity of the drive back allowed for moments to just be present with the beating heart and remembering my center. My family, my joy, my life.