I woke up early this morning feeling the enormity of everything that is today.

Just this past Sunday, I was celebrating the birthdays of my "twins." One turned thirty-three and on his birthday, received the first little sister after a house of boys. She turned twenty.

On that Tuesday morning, sitting in my suburban Kansas City master suite, finally relishing in a shower without her crying, Katie Couric was starting the morning banter of then 7 o'clock central time news. My husband came in from his run and was in the shower, baby girl was now in my arms, she was not a week old yet.

Katie Couric report and shifting to whatever footage was coming from what is now called Ground Zero.

A plane crash? In a building? An accident?

They were scrambling to figure it out.

My husband was showering for his professorship, the older boys were getting ready for school, it was up-to-that-point a normal morning. I had only been off my corporate job for about four weeks, leaving just a bit before my daughter was to be born, preparing to enjoy my first-time-ever having a long maternity leave.

But nothing prepared me for that day.

None of us were prepared.

Twenty years later, a lot has happened since then that make me feel less safe. Domestic terrorism, police killing, environmental situations, flood, hurricanes, fires, economic collapse, and a deadly virus that is mutating faster than vaccine-deniers are filling up ICU beds.

So, this morning, I woke up early, it is a bright and beautiful Saturday up here in the Northeast. It was a bright and beautiful day twenty years ago, just after Labor Day, it was going to be a great back-to-work for a lot of people. Set in the heart of the financial district, it was supposed to mark the first fall of this new millennium, the new possibilities of this modern era.

When it all came crumbling down.

I was up early that morning, also, but for a nursing baby and a desperate new-mom-again clamor for the shower before she started crying again. I had hopes of sitting in the rocking chair with her, it was my husband's first day back-to-work as a girl dad. We were hoping for a lot.

This morning, my last child, my second girl, who wasn't even born back then, is going to take her ACTs. She is a senior in high school and as a focused, dedicated, scholar, is well into the top five-percent of her class. She is a bit of a perfectionist.

She wanted my famous biscuits.

So I rose early to begin the ritual.

I melted butter and whipped together the sugar and vanilla that she likes, adding in the ingredients and thought about just how ordinary making breakfast was for so many back then. So many trying to make trains, some from Connecticut, where I live now, calculating how much time they had before taking one going South.

When I popped them in the oven and started on her fruit plate, a flood of memories filled my mind.

How do we reckon with the years?

How did it shift from being about the 3000+ souls who died - on the two planes that crashed into the Twin Towers, the lowest-to-the-highest employee crumbling together, the plane that was bravely taken down by passengers instead of our Nation's Capitol being another tragedy, sheroes and heroes - to being about the first responders who ran into the buildings? Almost every made-for-TV movie I've seen since then has only been about the Firefighters who ran into the burning buildings and yes, they should be applauded, recognized, remembered, and thanked. But what about all the other lives, the janitors, the secretaries and assistants, the mail clerks, the coffee ladies, everyone who tried to get their co-workers down smokey stairs, the ones who made it out and the ones who didn't?

This narrative change also made some things in this country worse.

It became just about the police and firefighters. Then about the war we never should have fought, about the military. I'm a military daughter, sister, mother, cousin, niece, so I respect all those in uniform, but something changed that day.

Hatred ensued against those who were sunkissed with smooth espresso skin and silky hair, even those whose ethnicity and religion had nothing to do with those who attacked this country.

Then like now, irrational fear and paranoia took over and instead of thinking together, many attacked.

So while making biscuits, I began to think about that day and all the days since and what we can do now.

Now, we have another more dangerous attack that is raging across this country threatening everyone, an unseen pathogen that is taking out so many lives. And many are refusing to deal with it by a simple vaccine or mask.

I thought about it as memorials and commemorations are happening today. Will we be Americans together remembering, much like some of us were the night before this new administration was sworn in and they had a collective grieving for the victims of Covid. Will we cry together for what was lost who was lost and will we remember?

My daughter came down to eat her breakfast. She has her ACT this morning. I wanted her to be nourished for the day. So many other mothers, wives, and husbands were doing the same thing all those years ago, readying for the day.

I looked up at the clock on the oven as I was plating her scrambled eggs and turkey bacon - 7:11 on 9-11. I paused for a moment. And thought about that. Just a normal morning, that's what it was. Living in the Northeast, being on EST, I marvel at how the day unfolds, my body clock still adjusting to the move from the Midwest.

Flight 11, the first to hit, aimed directly at the North Tower, followed by Flight 175 in the South Towers and Flight 93 out in the Pennsylvania field, all those were people who got up early early in the morning to make their flights. The flight crew, the flight attendants. I've been on those morning flights, they are usually filled with business folks starting the week, colleges were already back in session and vacation season was winding down, so less likely to be tourists. Seats of perceived power.

And that was the aim.

In New York and in DC.

To take down what Al-Qaeda thought was the global enemy, the economic freedom, the democracy, the rights and liberty to live as one chooses.

Yet, here we are, and we no longer have the economic liberty, our democracy was attacked from within, and choosing life is becoming harder and harder with homelessness, vaccine-deniers endangering others, and more lives lost than on 9/11 and the twenty years war.

Biscuits felt a bit normal, something I could do.

My daughter asked for them, but also, it was something I could tangibly put my hands on.

I don't personally know anyone who died that day. I know flight attendants who were diverted as a result of 9/11 and like many Americans, I know what it is like to go through TSA and be screened because of that day.

We all changed that day.

Our country changed that day.

The world changed that day.

I don't know what will happen in our tomorrow.

The Taliban have taken over Afghanistan now that the Americans have finally ended a war that went on far too long. The military-grade weaponry left there to wield terror against women and children. But are we meant to be the saviors of all the other nations when we are crumbling within?

Back in 2001, we were just reeling from a stolen election, chosen by judges, and just settled in to what we thought would be a normal four-years of not having to pay much attention to national politics, but just get on with life. Things were simple back then, no cell phones everywhere, definitely no cell phone cameras or social media to record every gory detail. There were no tanks going down streets against protestors and no hyper-first-responder language or flags.

It is important to remember what was lost, along with all the lives, all 2777 in the towers and on the plane as well as the 343 brave firefighters who rushed into those buildings to save lives. We honor them. I can't call all the names and probably in the next week or so when the crowds leave, will take a trek down to NYC to ground zero to have my own moment. I don't like crowds even before the pandemic.

What I hope happens is that we pause.

The sun rose this morning on a new day.

There is a promise in this. 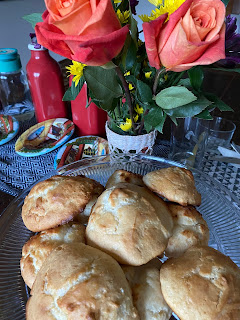 Like teenagers taking big tests and mothers making breakfast, and in the new day, there is a possibility.

Remember,  yes, we must, so we learn from it and keep learning.

I don't know what all the lessons are over the past twenty years.

I just know that if we, the collective we, don't act like a we, we will cease to be.

And maybe that is it, that is the lesson.

We are in this together.

Like the ACT my daughter is sitting down to take that will begin at 8:30am, I am sitting in that stillness of hope. She is facing her future with so many of the Class of 2022. A future they want to be possible with acceptance and wonder. Her friend group includes many religious expressions, nationalities, and ethnicities, languages spoken at home and foods shared. They are the beauty of the world.

And we tell them so they don't repeat the mistakes of the past and forget.
So we pause.
And reflect.
And look at the sun streaming through the windows on this new day.
And whisper a prayer.

In the Time Since

A year ago, after a difficult summer, I made the choice to center my voice, myself, and not stay in the shadow of networks that stifled lif...