I wake up every day in pain.

It is like my constant companion, with me, reminding me through the night of their existence, challenging my middle-aged-body to respond.

In my twenties, as a full-of-promise college student working a full-time job, going to college full-time, driving a car a bought in an apartment that I worked hard for, I was giving my college boyfriend a ride home from work. We were side swiped. He walked out ok, I was injured and hospitalized.

Pain does not always break.

Nothing was broken over thirty-six years ago, but something was deeply damaged in my body. My nerves that resulted in the ability to walk to be an exercise in excruciating pain.

I made it past, though, persevered, for that was something embedded in me from generations.

I went from walking on crutches to being able to walk and return to my life, even joining the little sister organization of my now sorority, stepping, dancing, and living my young life.

The way pain does.

We went our separate ways and I ended up in Chicago living, working, and walking those long streets from train to my Loop office.

It sent signals, suddenly, it was not gone.

I could barely move one leg in front of the other.

By now, I had been married, divorced, and was a still-sorta-young mom working full-time in a big city with a flat and tuition paid for two boys without child support. There wasn't time to stop and focus in on it, so I pressed, one tiny step-at-a-time until I made it to the train station and sat down.

There wasn't a cure for nerve damage. This was long before oxycontin or even Aleve for the pain that radiated down my legs, seemingly favoring my right side.

My muscle memory of track and "walking it out" was the way I pressed, and rested it at night, stretched it, and just kept on moving.

Fast forward decades of lives lived in different places and that persistent nerve pain that flared up with the weather, too much activity, or whenever they decided they wanted me to remember what happened to me when I as twenty-two.

So, I didn't pay attention to the signals.

First a crick and a bend, those pain neurons in overdrive.

Thinking it was just my sciatic nerve, I did what I always do, try to walk it out, pull out one of my handmade wooden canes, and elevate it.

Until it was May and the pain was lower in my leg than usual. Previously, it was concentrated in the muscles of my right buttock and down my right thigh, never in my calf.

My daughter was home from college, she accompanied me but Covid restrictions meant she could not come inside and it was hours before they saw me. I was thinking, "maybe this isn't that big of a deal," but it did hurt and I kept it elevated in the ER.

Finally, they saw me, took me to an ultrasound.

The doctor comes out and tells me good news, bad news. 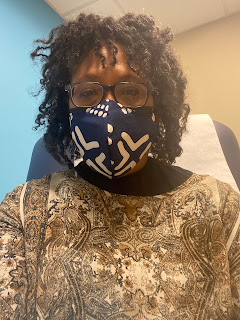 Not a blood clot, thank God, but something called Baker's Cyst, something they see with knees, fluid possibly, go see an ortho.

No cure for it, just elevate it, take some Aleve, and if it gets really bad, they may want to surgically remove it.

That was the ultrasound.

But the pain did not stop.

Like the other neurons firing up in my heart and soul, it was persistent.

Until recently, I worked intensely in an organizing with one of the claims being centering the ones closest to the pain, attempting to use activism to right four hundred years of wrongs. The work was exhausting, all consuming, and at times, deeply painful.

This was an especially hard summer.

I kept pondering how in some spaces, stories were captured for the benefit of the "movement" but not necessarily the ones living in the middle of systems trying to either make their own mark, like the Tyrone character in All American, a mark that causes enduring rifts. Or like the Spencer character who had a chance to get out and be better positioned to make an ultimate difference. There are always questions of being, centering, leaving, staying, and overcoming what hurts so much.

Sometimes, the hurt is ignored, shoved away, protested away, or coped-with-away.

Until it reminds us that it is not gone, it is still there, sending signals to pay attention to it, one way or another.

Like the sciatic nerve damage that flares up and can be so intense that it caused me to not tune in to the first dull ache in my lower leg.

After a visit to the orthopedic surgeon and an X-ray of the right knee - those bones we didn't remember in science class - patella, femur, fibula, fibula - I was back in his office two weeks later with his demeanor a bit somber.

He said it wasn't my knee - that is what I thought, getting old, and what a former doctor thought when I mentioned aches going up and down the stairs.

"You need an MRI," he said. Then he started asking questions.

We must ask questions to get to the source, it is never as simple as what initially shows up.

Bone disease or bone cancer in the family? Any breaks? How long has this been happening?

"Well, I don't want to alarm you, but this is something we need to take serious." You know that look when they sit, as close as they can with a mask and face shield in Covid-protocol space.

The nurse comes in with her instructions that I have to have labs done and the MRI is scheduled -without contrast dye because I don't want that to be the thing that takes me out.

We whisper in pain when we tell someone.

We shout it pain when we are in the middle of it.

We cry in pain when the reality of it is overwhelming.

Those closest to it are not an imaginary entity that is a great tag line to solicit donations or get people to come to a meeting.

We all live it in, at some point.

It is a signal, a communication, a deep system of interworking networks of nerves and neurons traveling up and down our body, in our heart, our soul, our mind, to hold up the big red STOP sign. Pay attention.

I don't know if this upcoming MRI will show cancer or chondracalcinosis and explain that mass on the side of my leg - the fibula, by-the-way - or if it will be some other big medical word that explains things like intra-articular body, abnormalities in the lateral tibiofemorial joint or whatever medical term my marketing degree did not study.

It is just painful.

Life is also a bit like that. In the bones and the blood, the foundation.

Neurons signaling something is wrong. An interruption.

I am nervous, that is also a response. Whatever it is, it is incurable, one is with a five year 15-30% survival rate if it is the BIG C that was in another part of the body, silent, that traveled to the bone or five year 60-70% survival if it originated in the bone and can be treated with surgery, reconstruction, radiation, all that good medical science.

Answers, that is what the MRI is supposed to give me, a deeper look.

What I do know is that it has at least given me a cause, sorta, of the big why every night my leg was like someone was stabbing me and I elevated it to get a moment of relief.

Just like the work of activism and organizing I did for years.

There were moments of relief, we spoke at a board meeting, shared community concerns, or even were able to have an impact on policy. But it is still only a moment of relief.

Until the underlying issue is attended to.

Like the history the surgeon kept asking me. Yes, my dad had rheumatoid arthritis, but this is not that. yes, my dad had surgery to remove a couple vertebrae but that was a hairline fracture he suffered during the Korean War that went unnoticed until the pain was too much. He had a full upper body cast for months. Yes, he had some bone disease I never knew the name of. No, I don't have kidney stones, yes, I am a living kidney donor. No, no, no to a litany of questions he kept asking me because there is no specific early screening for bone cancer or bone disease.

It is not noticed until it is noticed.

We can't always see, feel, or hear until we are able to see, feel, hear.

Then we can pay attention and consider what it is telling us.

So we stop, consider, imagine, reckon, and decide what we can do. We can appreciate the work that pain has done - it has caused an alert, we are paying attention.

What can we do.

And then try to do it.

Because even if it hurts, it is still a signal of possibility.

In the Time Since

A year ago, after a difficult summer, I made the choice to center my voice, myself, and not stay in the shadow of networks that stifled lif...