Yeah...But Can You Not Write About it?

I never really thought of myself as an influencer.

I'm barely understanding Instagram and refuse to venture into TikTok land, so it was a bit surprising to me that someone mentioned to me about writing.

Granted, I've been writing since I was nine years old and my late father told me, "Tayé, go write your stories." I did and those etchings with my #2 pencil and stack of red Big Chief Tablets (I grew up in the 70s, that's what we had in my mid-MO town), were lost during one of those never-ending basement floods of my childhood home.

But I never stopped writing, even when I didn't think it would matter.

I took first the name, Tayé Foster. The latter being a matrilineal family name. I added Bradshaw over a decade ago when I wanted to really think about the mothers-mothers-mothers-mothers of my life and how my being has been framed from them. Then, I started writing a few lines here and there, poetry mostly. I'm not a novelist by any stretch of the imagination.

Then one day, I started writing posts and a few online articles that were picked up. I wrote on Huffington Post and The Kirkwood Patch, was regular on Helium until it was bought out by RR Donnelley and disappeared. Finally, I started this, the Musings. It became my place.

Well, as my place, my kitchen table over a latte, I write about whatever is happening around me, in the world, in the community, or to me.

About a decade ago, in the. middle of some intense educational equity organizing and activism in my former town, I was writing intensely about it. Again, never thought of myself as an influencer, just someone with a heart for justice who is a bit of an Introvert and used the tools at my disposal. I didn't even think anyone was reading it.

Until one day, a certain administrator asked me, "yeah, but hey, can you not write about it."

I sat on the story for a minute.

And all these years later, with something else brewing in me that could be scorched earth if I wrote about it, I wondered, who does that serve?

For a month, I have been in an intense transition, an unraveling of my heartstrings to something that I was passionate about but was no longer singing my soul song. It was hard to maintain focus on all that was happening, and it was a lot happening, in a state several thousand miles away. I wasn't on-the-ground there anymore and was frankly being drained by the non-stop fires that needed to be put out on top of the questionable practices that were becoming vexing. So I began to disentangle. First with a block and then with a brick wall. The separation was necessary and quite painful, as almost all activism and organizing is if one is really trying to use their gifts to change lives.

I finally hit the end button this week, decided while walking along the shore that I was trying to hold onto and save something that was over, including a personal connection. It needed to be mourned and named.

But write about it?

That I haven't done yet, not in all the scorched-earth-detail that could really derail efforts of liberation for the community. I don't want to do that. But how many times have I written and scratched out, written and deleted? Too many to count.

But again, who does that serve?

Loyalty comes with a price. I'm a True Blue, an INFJ, a Golden Retriever, whatever description is used for someone who is intuitive, perceptive has strong EQ, and is an advocate for what is right. When someone comes to me in pain and identifies a real wrong, I shift and try to go-to-bat for them, even if it costs me.

There is a limit to that.

A dear sister friend reached out to me, without me telling her, knowing something was happening, and reminded me to take care of my heart.

Black women are not often afforded that space.

To take care of our heart, to name that something has affected us, and to not be labeled in identifying it.

There was a Twitter post the other day about the stereotype of Black women in the work place being called "angry" or "inflexible" or any other trope for bearing the brunt of office politics. If they name something is wrong, like not being paid, or being given lousy assignments, or simply being excluded from the group, then they become the problem, the issue.

It can be exhausting.

And the expectation is that we bear it up. 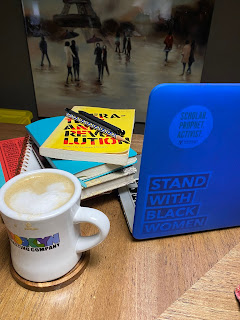 Regardless of industry, even in places of ministry and faith circles, women, Black women, are expected to shoulder the burden, carry the bricks stacked on her chest and still walk upright to serve the rest of the world. We can't do it all the time.

And be silent about it.

The pandemic, though, is giving a glimpse of what can be.

Maybe not right away writing about THAT THING, whatever it is, but a view into what could be.

Reclaiming oneself and one's right to one's story and that we owe no one nothing, not even our silence.

So yeah, maybe I will write about it one day, as soon as I finish this coffee and watch the rain in peace while I breathe free air and muse.

2021 Copyright by The Tayé Foster Bradshaw Group LLC, a Connecticut entity focused on the liberation of story and the celebration of words.