Of Inestimable Value and Great Worth

The meaning of my name - Antona - is "of inestimable value and great worth."

My mother gave me that name. Really, my name is Mary Antona, named after the only Black nun who marched at Selma and who was a social and racial justice advocate. I was given a name with intention and aspiration.

I woke up this morning and declared that I am the prize.

In all my Taurean stubbornness and determination, in my introverted reflection and intuition observation, I am the prize, you win with me in your life and in your corner.

If you know me, the last week has been a bit of a shock and a bit difficult, I contracted Covid in my home from my husband who got it at a big Earth Day event at the college where he is CEO.

All the emotions raged through me, shock, anger, denial, and of course, acceptance that this thing I avoided for two years, finally caught me. I always mask - KN95 and a cloth one. I work at home as a writer and literary curator and am rarely out during the week. The only way I was going to get it was if someone brought it. home.

I was lamenting and then I became thankful.

I was prescribed an antiviral, my husband was given the monoclonal antibodies infusion, he is a bit older and has more health issues that I do.

Rest was my friend and it took more than ten days to begin to feel a bit like myself again, so I was thankful for a home big enough for us to quarantine, for great and mindless TV in Grace and Frankie on Netflix - all seven seasons, and for daughters who brought food and water outside my door.

So today, on my birthday and my first full day out of isolation and quarantine, after ten days of being just to myself, I emerge into the world declaring that I am not being silent or shrinking for anyone anymore.

I've done a lot in my life and helped a lot of people, I've given to causes, taught people, helped others achieve their dreams.

This morning, I looked at myself the way my mother did when she named me.

My mother had MS and was already in a wheelchair, she had suffered two miscarriages before me, and if these old white men and their enabling rapist pawn had had a Roe v Wade to destroy, she would have been captive in her state that is striping away a woman's rights to herself.

Already, when I was born, a married woman had to leave her job if she was pregnant, could not have a credit card or really anything of value of her own. All she had was her jewelry, clothes, and personal items, she couldn't even really claim her own children in this country.

When I looked at myself, I remembered the stories my father told me about my mother, how she wrote on the back of my baby picture "Chairman of the Board, " of course, there were no pronouns back then, but in her writing, she was putting into the world what she wanted for me, her fifth born, her last daughter.

I looked at my own last two children, one racing out the door for the last few weeks of senior year and the other catching a bit more sleep before starting her summer job, she is home from college. These girls are stepping into a world they will have to fight harder for.  As their mother, I pray that I have equipped them and given them all they need.

When moments of self-doubt and shrinking started to creep in, when I had the look from others that I shouldn't say all that, someone even said to me not to say all my accomplishments, much the same way white men try to address Black women with PhDs as their first name, it was reductionist and dismissive. 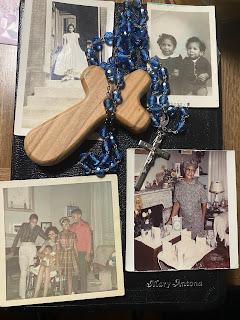 I've done a lot and still have a lot to do.

I am the prize.

To any project, to a production, to people.

Me, just as I am, in my latte drinking, writing, book-reading, art loving, ocean gazing self.

And that is the gift of today.