The Woman at the Well as Womanist Warrior

I've been thinking a lot about the unnamed "Woman at the Well" of John 4.

In my theological studies, I always contended with her story.

Growing up in the Black church, the Black Baptist church, particularly, she was always presented as a wanton woman, held up as someone to avoid becoming.

Being a young woman in ministry, she was held up again as the cautionary tale.

But it was when I entered seminary that I wanted to give her some more thought.

She was more than what society said about her.

In the wake of Roe v. Wade being overturned and the American Taliban instituting their own versions of Sharia Law, I thought more of her liberating actions in the face of so much conformity to overreaching power.

Back then, like now, women did not have a lot of rights.

Rights over one's body was definitely not one that was common place.

But she claimed her right to her own identity.

After the systems that were supposed to take care of and support her failed over and over, she finally had to look to herself for her worth and survival.

It was in this, "claiming her space" as my daughter declared in her graduation speech, that this "Woman at the Well" did when everyone else around her was just going along to get along.

The men talked about her like a dog and shunned her.

The women talked about her like a dog and shunned her because that is what the men did and they wanted the protection they thought came from conformity.

So she set out alone to ponder the questions of her life, the calling on her life, and what she wanted yet to do with her life.

This was not an old woman, not a woman ready to go quietly into that good night.

In my theological imagination, she was a teacher, an intellectual unafraid to turn over the questions of the day. She was the first real professor of that young man who revolutionized the world.  I believe it is because of this encounter very early in his work, that led to him becoming such a strong women's rights advocate.

I've thought a lot of how much the overturning of Roe had to do with keeping men in power, particularly white men.

It was never about life.

For if it was, now as then, the things women need to have a fully actualized life would already be a part of the public conversation.

But it is not.

But this woman made a decision to take back what belonged to her.

Women were counting on her to do so. Even if they didn't know it. They were watching her, she was brave enough to defy convention and speak to that young man who asked something of her. She was not about to just jump because another man said so.

When women make moves to empower themselves, they empower others.

When women understand the interconnectedness of our liberation reaches beyond the limitations of race, they empower others.

When women are brave enough to say no more to the many men who only want to use their bodies, they empower others.

There is strength in numbers.

There is courage in being the first.

She was the first of many who proclaimed after her.

I keep thinking of her, taking my lessons from her and giving them to my daughters.

No matter what anything thinks of me, of her, she is still a beloved woman, a remembered woman, a woman who made a difference.

That only happened because she was free to make some declarations for herself, even if that freedom came with a social cost.

I wonder how many are willing to truly stop and say no more?

Conformity, complacency, and compliance will only keep us in chains.

Truly, now, we have nothing more to lose.

Like that woman, that warrior for freedom and liberation, so many have dared to stand up and speak.

There is a rally for women's rights in DC.

There are women that have taken to their platforms to denounce reducing women to what their body parts can do for someone else.

There have been women demanding that the Executive Branch do something the Legislative Branch has clearly indicated it is unwilling to do.

As I continue to ponder and process the future for my own Gen Z daughters, I look to this woman of another time for her courage and strength.

Just like the newly sworn in 116th Justice, Ketanji Brown Jackson, dared to be present in a world that wanted to erase her, this woman refused to be silent. She knew she could make a difference, so she persevered.

It will take all of that for us to get past this dark night.

Under her pseudonym, Writing as Taye Foster Bradshaw, this writer holds a Master of Divinity with deep study in the Prophets, Proverbs, and Psalms through a Womanist theological lens focusing on the power of story to transform lives. She and her family live in Connecticut. She is a Certified Deacon in the United Methodist Church. 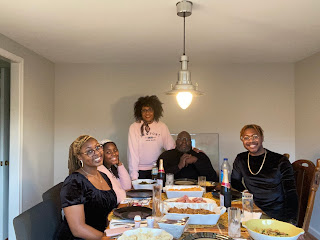